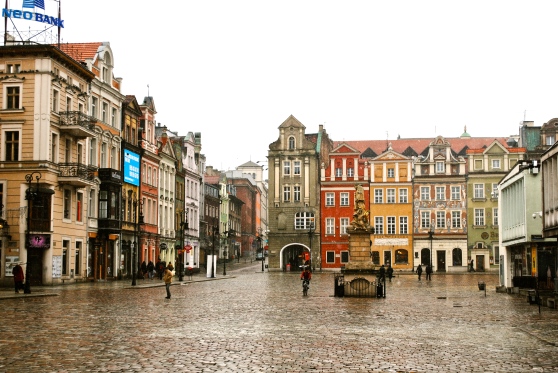 This is the Stare Miasto (old town) of Poznan, a small Polish city in north-west Poland established in the 8th century. It was captured by the Germans (of course), ruined a bit (like most of Poland), and then recaptured by the Russians who ruined it a bit more (by putting up ugly buildings), and finally gained its freedom when Communism fell in 1990, when it was renovated by the proud Poles. In 2012, it was one of the host cities for UEFA Euro 2012 Cup, when Poland jointly hosted the Euro Cup with Ukraine. Success stories from cities like Poznan show just how far Poland has come since the early 90s! And like most main squares in Poland, Poznan’s gorgeous rynek (market square) pairs cobblestones with vibrantly coloured buildings, creating a beautiful town centre (even during a snowstorm such as this one).