This beautiful pink palace in downtown Warsaw has been the seat of the Royal Court of Poland since the 16th century until what is known as the Partitions of Poland. For those of you not up to date on your Eastern European history, the Partition was a series of three divisions of the Polish-Lithuanian Empire at the end of the 1700s. Summed up, Poland-Lithuania’s neighbours basically chopped up the kingdom in sizable chunks, claiming the land for themselves. Between the Russian Empire, the Kingdom of Prussia and Habsburg Austria, Poland as a state ceased to exist for 123 years, instead becoming integrated into these various nations, including Warsaw and it’s royal castle, which became part of Prussia. Despite all, the castle has stood the test of time. It has seen the ratification of one of Europe’s oldest constitutions, Constitution of 3 May 1791; it has been used as an administrative centre by the Russian Tsar; it housed German Governor-General during WWI; it has been burned and looted by Nazis; it has been damaged during the Warsaw Uprising; it was nearly destroyed during the War, only to be rebuilt in the 1950s. Warsaw and its beautiful castle have seen a lot things over time – and yet, here they still stand proud. 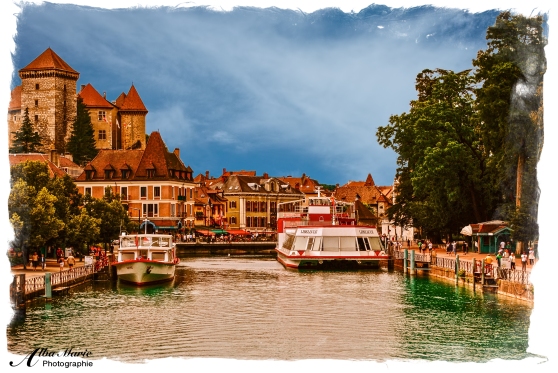 Quiet canals meander the cobbled streets of Annecy. Colors slip down the facades, floating into the canals’ ripples, drifting out into the lake. One of the cleanest in Europe, it must certainly also be one of the prettiest. The stout, stone fortress glares over the orange rooftops of its town, a citadel lost in time. Artists sell their wares – paintings, photographs, jewellery, pottery. Vendors sell ice creams and chocolates to tourists while diners chat on sunny terraces, sipping beers and lemonades. The swans swim by, searching for the forgotten crumbs that tumble in the canals. The streets ring with people taking advantage of summer in the mountains. Like a scene from a painting, Annecy’s streets merrily portray summer bliss.