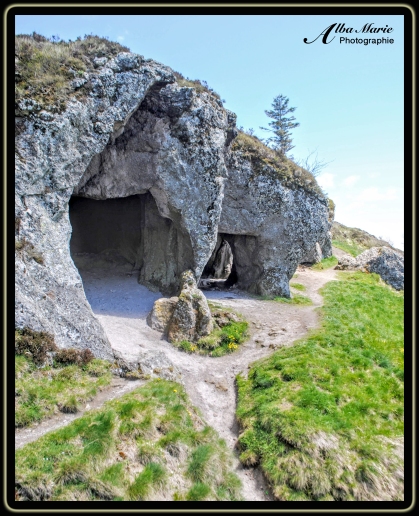 The region of Auvergne is surely one of the most under-rated in all of France. Barely a blimp on most tourist’s radars, Auvergne, located in the heart of the country, is home to an incredible mountain range, the Massif Central. Incredibly ancient, beautiful and rugged though accessible, the Puys of the Massif Central are a hiker’s paradise. While the Puy de Dôme is the icon of Auvergne and its mountain range, there are many other lesser-known mountains, like the Puy de Clierzou (or Cliersou), rising some 1,199 metres and home to a network of caves. Though the mountains were remote until opened up by recent roads, the Caves of Clierzou have been used since Antiquity, when they were found and inhabited by the Gallo-Roman peoples. Atop the Puy de Dôme there is the Roman-era Temple of Mercure, but in smaller places like the Caves of Clierzou, there is also evidence of human use through the centuries. From the Caves of Clierzou, one has a good view of the Puy de Dôme, a sacred place for those who built their temple here. Oh and did we mention these mountains are extinct volcanoes? On your hike through the Puy de Clierzou and the Puy de Sansy past the caves, you’ll get the chance to stand inside an ancient volcanic crater…

Pro tip: Clermont-Ferrand is the regional capitol and main point of entry. Near the Caves of Clierzou, Orcines is the closet town, and home to a splendid cathedral (one of five of the same design, like this one at nearby St Saturnin). There are many hikes in the Massif Central and the Puys – the hike up Puy de Sansy (with the added bonus of Puy de Clierzou) is one of the more popular and well-marked. There is some info here and a circuit of Puy de Sansy here. No wild camping or fires allowed.