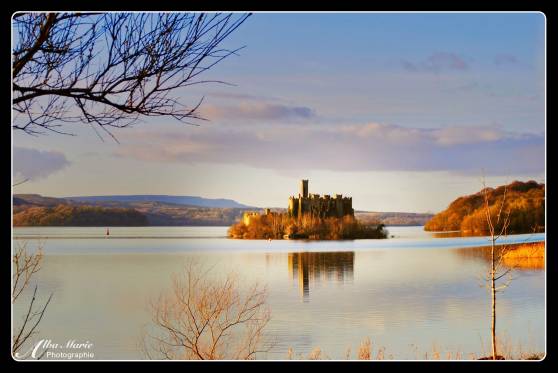 Lough Key is the centrepiece of Lough Key Forest Park, located at the heart of rural Co Roscommon, part of a region known as Ireland’s Hidden Heartlands. Woven and crossed with trails, Lough Key Forest Park is the perfect way to visit Ireland’s countryside if you don’t have the time or ability to undertake a wilderness hike, or if you’re looking for family-friendly hiking paths. In the centre of Lough Key – named for an ancient druid called Cé in Irish folklore (folklore attributes the lake as his grave site) – there is a tiny island roughly half an acre. In the centre of Castle Island is… you guessed it, a castle. What we see today is McDermott’s Castle, which is a folly (or ‘fake’ castle) built as a gothic castle in the early 1800s to improve the view, but there’s been one castle or another on Castle Island since the the 12th century. The castle of the island has since been struck by lightning, attacked by fire ships, sieged by raft-mounted catapults, cursed by the Hag of Lough Key and burnt during WWII.

Pro tip: Lough Key is located 2h from Dublin on the Sligo road. Though you can’t really visit the castle (it was sold recently via auction!), there are exquisite grounds for a hike or picnic, as well as the famed puzzle rooms (a bit like an escape room) and a cafe. Keep in mind the car park isn’t free.

Other Folly Castles in Europe

The Scottish Highlands are a romantic yet desolate place. Hiking in these remote hills feels a bit like being at the edge of the world. Beautiful, amazing, alone. Snuggled deep within the forgotten Northwest Highlands, the village of Torridon clings to the shores of Loch Torridon. The region is full of places to muddy your boots and whet your imagination – one of which is the little Loch Clair, where an off-the-beaten-path trail circumnavigates the lake, giving views over Beinn Eighe and other peaks of the Torridon Hills. Other peaks in the Torridon Hills include Liathach and Beinn Alligin, all of which are known to climbers, hikers and outdoor enthusiasts. This is the kind of place to get lost. Not lost in the sense of “send the mountain rescue helicopters!” but lost as in a place you can get lost in your thoughts, daydreams and nature. This is a place where the romantic poets and landscape painters of the world would feel at home, a place where the 21st century has yet to find, where mud-plastered boots, Nordic walking poles and Gore-Tex hiking gear is the style.

Pro tip: To hike Loch Clair, head west on the A896 from Torridon for 15 minutes until you hit the Loch Clair car park on the left; the trailhead is across the road. Follow the rugged Loch Clair shores for magnificent lake and mountain views and stunning silence – best viewed during the famous Golden Hour!

More Places to Hike in Europe

The tiny French village of Balazuc snuggled deep within the timeless county of Ardèche is a place you go to lose yourself in another era, another way of life. Sun kissed hills are woven with ancient villages, a patchwork of medieval architecture fused seamlessly with the brown earth and golden fields of southern France. Balazuc is one of such places. A veritable labyrinth built of golden stone, the village’s narrow alleys wind up and down, dipping half-underground, through other buildings, around and through the hills in a completely random and at times mysterious manner. Hole-in-the-wall cafes dot the facades, and a hilltop castle and church duo seem to be trying to outdo one another. To access the steep hilltop village, one must first cross a surprisingly high bridge over the Ardèche River – not a bad place for a quick dip! And just a stone’s throw away is the equally-beautiful and heart-throbbingly medieval village of Largentière as well as the ever-impressive Gorges d’Ardeche. Get ready for a coup de foudre – French for love at first sight!

Other Amazing Medieval Villages in Europe

The tranquility and silence feels overwhelming while walking along Ireland‘s shortest river on a sunny autumn afternoon. The small town (and region) of Sligo, hidden away in Ireland’s northwestern corner, is happily left off the bus-tourism itineraries. It is a small place, lacking the diverse and cultured festivals, events and museums of Dublin or Galway or Limerick. But what Sligo lacks in this respect, it makes up for it in the Great Outdoors. Sligo is town literally built between land and sea: on its right-hand edge is the colossal Lough Gill; on the left is Sligo Bay and the Atlantic Ocean. And flowing right down the middle – Sligo’s main artery – is the Garavogue River. To the east is the iconic table mountain, Ben Bulben, and to the south is the small but sacred Knocknarea Mountain. And in the middle is Sligo town. This place is the quiet adventurer’s paradise: stand up paddling, kayaking, hiking, cycling, paragliding, mountain-biking, trail running and horse-riding are normal weekend activities here. Emerald hills, rugged coasts, romantic castles, crashing waves, wandering sheep – this is the picture of quintessential Ireland, and of Sligo itself. County Sligo is an unassuming, down-to-earth sort of place where people go about their lives much like these boats: in a slow but buoyant fashion, floating and glowing along the river – something that us city-dwellers, suburbanites and fast-walkers could learn a lesson from.

Chateau de Chambord, France as Seen From Across the Moat

As the most expansive and over-the-top chateau in the Loire Valley and among the most excessive of Europe, Chateau de Chambord is certainly the crowning jewel of the already castle-laden Loire Valley. Known for its rich (and royal or at least very noble) castles, the Loire Valley is full of lavish summer residences – the Chateau de Chambord is no exception. Built in 1547 in the extravagant French Renaissance style (a style which was, by definition, extremely extravagant), it was constructed for King Francis I of France as a hunting lodge, it was though never finished. Among the many distinguished guests who stayed there, the most important was Leonardo da Vinci, and it is to him that we attribute (though without proof) the chateau’s unique and fascinating double-helix staircase – i.e. two intertwined, parallel staircases that twist upwards around each other but never touch. 16th-century chateaux are in many ways faux chateaux. Architects used basic designs of castles – like moats, towers, turrets, crinolines, keeps, drawbridges, etc. – but they were never meant to be defensive, and indeed weaponry and war in this era had changed so dramatically that castles were of less use in combat (to be fair, most of Europe had settled down a bit to form some degree of stability, at least from one region to another, though there were exceptions like the French Revolution). If boiled down, Chambord is really composed of a central keep and four massive bastion towers, connected by high walls; the rest is elaborate design. Chambord is best visited in conjunction with other Loire Valley Chateaux like the Chateau de Chenanceau for example – try driving from one to the next, or if you’re feeling adventurous, consider biking from chateaux – the castles are close enough together to make this a relatively a feasible task!

Charles Bridge is surely one of the world’s most famous bridges. Built in 1357 and the only means of crossing the thundering Vltava River until 1841, both Charles Bridge and the Vltava River have played a strategic and economic role throughout the city’s history. Prague’s location on the Vltava River has long been important for trade and shipping between eastern and western Europe, and that economical power, along with Prague’s famous bridge that connects its timeless old town with the majestic Prague Castle, have all helped to bounce Prague to international acclaim. Though always beautiful, there are two moments where Prague becomes nearly divine in beauty. The first is Prague covered in soft, brilliant snow, the pure white of the fallen snowflakes contrasting beautifully on the dark, ancient stones that make up the Gothic architecture of Charles Bridge, the Castle and most of the Old Town. Alone under the evening blizzard with snow underfoot, the smells of chimney smoke, hot wine and roasted chestnuts intermingle in the air, as the air itself rings with the jubilant sounds of the famed Christmas market – the perfect picture of Christmas bliss. The second time when Prague becomes almost unbearable with beauty is when bathed in the brilliance of the Golden Hour, both at sunrise and sunset, when the incandescent light glitters off the richly-coloured stones and the ancient architecture to make you feel as if you are part of a fairytale, or a painting. Sunrise is preferable – this way, you will avoid the crowds. Sunset, as seen above, will not disappoint either.

See More Reasons Why Eastern European Cities are so Magical 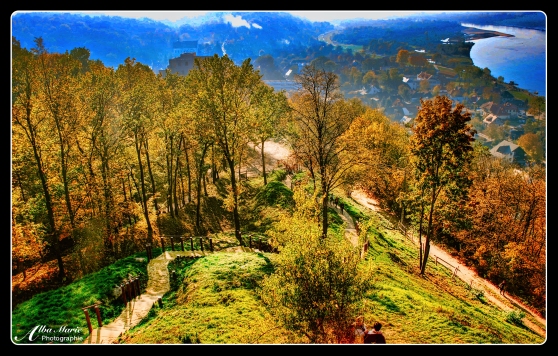 Autumn colours light up the palate of Kazimierz Dolny’s castle gardens. Kazimierz Dolny is a small, quirky village in eastern Poland within easy day trip striking distance of Warsaw, Poland’s capital. Though a short-lived season, Poland is vivid in autumn – September being a spectacular month for a visit, as the entire month seems to follow the rules of the Golden Hour usually attributed only to brief moments at sunrise or sunset. After weaving Kazimierz’s bustling medieval streets, head up the hill where you will pass the zamek – the lower castle – before climbing the path to the 19-meter tower, or the upper zamek. The view from here over the castle gardens, town and Wisla River (Vistula River in English) is simply splendid. Before the castle was built, the hilltop housed a beacon to warn surrounding settlements of impending attacks. Once upon a time, there was even a drawbridge, a moat, and five floors. Though you can’t climb more than one storey up now, the castle, gardens and tower are all a mystical and magical place made even better when doused in the golden autumn sunlight.