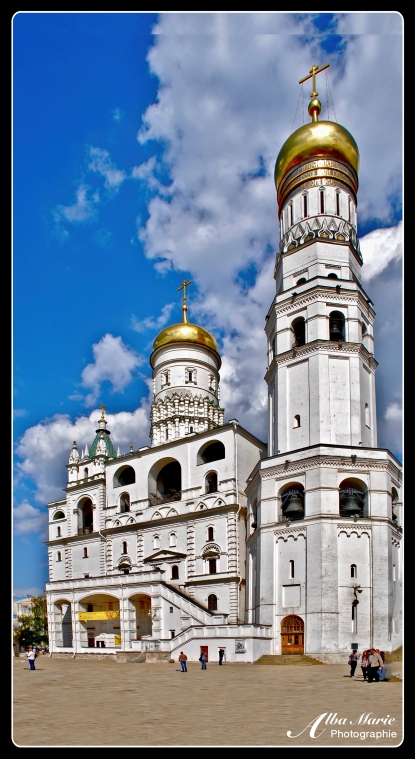 Ivan the Great Bell Tower in the Kremlin, Moscow, Russia

The Kremlin: probably one of the most infamous places across the Globe, it seems that few people choose to venture inside this massive and widely important complex. In essence, the Moscow Kremlin is a fortified complex snuggled between Red Square and St Basil’s Cathedral, and encompasses five palaces, four cathedrals, and the Kremlin Wall interspersed with the famed red towers of the Kremlin. It is the Russian version of the White House, serving as personal residence of Russia’s president (today meaning the controversial Vladimir Putin). In the past, versions of the site have served as the seat of the Grand Dukes of Russia, the famous Russian Tsars, Catherine the Great and her extravagant Neoclassical palace and Soviet rulers. The above building is the Ivan the Great Bell Tower, which contains 22 bells and is now the tallest Kremlin structure. It is not the first bell tower to appear here; indeed, Moscow’s first bell tower was erected here in 1329, called St Ivan of the Ladder Under the Bell. One of Russia’s Grand Dukes, Ivan Kalita, built this massive whitewashed brick version in 1508 – the name is supposedly a nod towards the original tower, but one can imagine that Grand Duke Ivan wasn’t too opposed to name his construction the ‘Ivan the Great Bell Tower’ either! To visit this tower and the rest of the ever-impressive and awe-inspiring complex, one must buy tickets at the entrance, taking care stay with the carefully-allotted paths and buildings unless you’d like to see what the inside of a Russian prison looks like! Visit the exterior of the complex by exploring Red Square and alternatively, take a boat tour of the Moskva River at sunset to see Moscow in a new light!