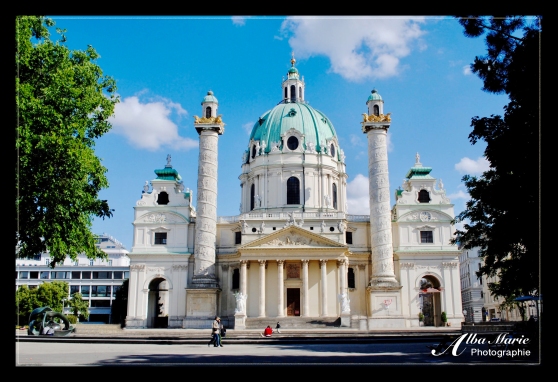 In a city bursting with impressively gorgeous architecture, possibly the most stunning example of Baroque architecture in Vienna is the Karlskirche, just off the famous Ringstrasse. The Karlskirche came to be on the bequest of Holy Roman Emperor Charles IV. Commissioned in 1713 to mark the end of the recent plague, the Karlskirche is dedicated to Charles VI’s namesake saint, St Charles Borromeo, who is said to alleviate the suffering of plague victims. Built over a span of 21 years (1716-37), the famous Baroque church was situated quite close to Hofsburg Palace, and was used as the imperial house of worship. With a wide array of architectural inspirations – largely from ancient times, Architect Fischer von Erlach was inspired by Hellenistic temples as well as as Roman columns – Trajan’s Column in Rome, with a copy in Bucharest, was one such source. All of this has been combined to create the Karlskirche – surely one of Vienna’s most spectacular pieces of art, which is saying something as the entire city seems full to the brim with impressive designs (see a Christmas night at the Karlskirche here). A final remark is that just next to Karlskirche is the Spitaler Gottesacker, site of music composer (another art form widely associated with Vienna) Antonio Vivaldi’s tomb – though the exact location is lost today. Vienna is a truly amazing city and a must-visit for architecture nerds, history buffs and budding photographers!

Pro tip: Be sure to try some of the delicious foods and drinks while here – like the Mozartkugeln chocolates, the Wiener schnitzel and the delicious Germanic wheat beer popular in the region. Vienna is also known for its cafés – stop in for a coffee and a Sachertorte or any of the other delicious hand-baked tortes or cakes!

More Places to See in Vienna