Andalucia is a dry, sunburnt land in the south of Spain. The region is among Spain’s largest and most populous regions, with small communities spread out over a blanket of brown hills, jagged mountains and rolling fields. Many such communities are part of the Pueblos blancos or ‘white villages’ of Andalucia, picture-perfect villages beloved by tourists. This particular pueblo blanco, Zahara de la Sierra, is tucked away in the Sierra Nevada mountains and overlooked by the Castillo de Zahara de la Sierra. The castle dates back to the Moorish era of Spain. During the early Middle Ages, Spain was inhabited by the Moors, broadly defined as muslims originally from the Maghreb living in southern Europe, who greatly influenced Spanish art and architecture and even language (Andalucia, for example, comes from Al-Andalus) until finally being driven out completely by the 1490s. Very little remains of this once-impressive fortification in the village of Zahara. Today, all that’s left are the vestiges of a few walls and a signal tower, which, once climbed, will provide stunning views of the cheery white-washed walls and orange roofs of Zahara, the azure waters of the local reservoir, the sun-kissed chocolate-coloured fields hugging the village, all the way out to other nearby villages. Though beautiful, it is evident to see why this may not always have been an easy place to live. The castle, and the village below it, is carved into a rugged, rocky outcrop, with heights ranging from 300m to 1100m, and the village’s name “zahara” comes from “sahra” meaning desert. The seemingly-romantic sun-kissed fields, rocky outcrops and windswept panoramas may be seem idyllic today, but life in such a dry and remote place (it’s 100 km from the sea after all) wouldn’t always have been so perfect! 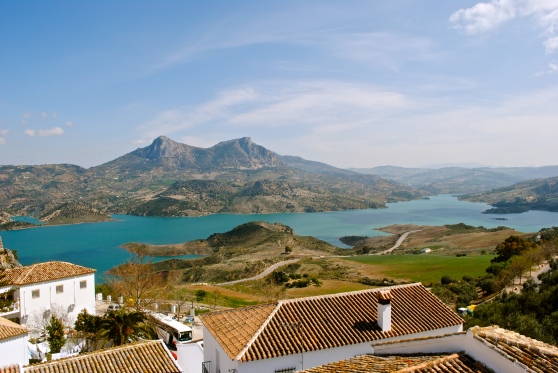 So-named because those mountains in the distance are the original Sierra Nevadas (before America stole that name too), pretty little Zahara is considered to be on the pueblos blancos or “white towns” that form a belt across the Spanish region of Andalusia.  Recommended to us by the locals as “one of the prettiest places you’ll ever see,” this photo is taken from a balcony in a house at the top of the mountain that is town. This could’ve been our home-away-from-home (if we’d bought the flat that came along with it) but alas, I’ll have to be content with the pictures. This lake is actually man-made (from a dam). The town was originally a Moorish outpost when it was still controlled by the Moors, and they built this castle atop the hill to protect the route between Ronda and Sevilla. It’s gorgeous!