Dubrovnik is one of those places that somehow just doesn’t seem quite real. Is it a fairy tale? A place in Game of Thrones (which used it as a filming location) or Lord of the Rings? But no, Dubrovnik is the thriving southmost city of Croatia, an orange-tiled marbled marvel clinging to the shores of the very turquoise Mediterranean Sea. Vibrant, busy and loud, the narrow streets of this small but beloved city vibrate with life. But from here, beyond the ancient streets, beyond the beaches, up above the peninsula of dusty hills framed with of lush greenery, we have the very best view of this beautiful place. Croatia is a place of rapid change, a place where time most certainly does not stand still. As the EU’s most recent member, it is a place where past meets future.

Pro Tip: Unless you’re looking for a typical beach holiday, visit Croatia in the off season to avoid the busiest of tourists. 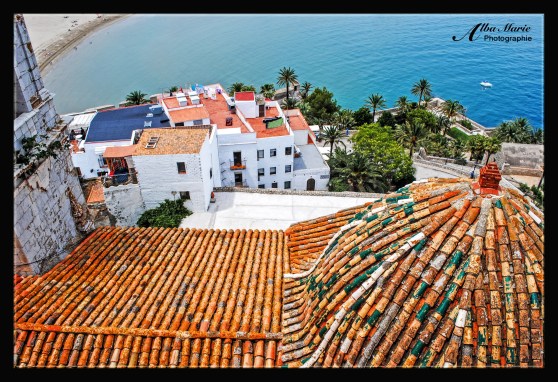 Orange roofs contrast against the deep azures of the Mediterranean and the whitewashed walls of the fairy-tale houses crowding the narrow streets of medieval Peñíscola. Beautiful, curved (oft handmade) terracotta roof tiles are perhaps one of the images most associated with Spain and its hard not to conjure up images glasses of tinto de verano and sangria, massive plates of Valencian paella, and delicious tapas when you see roofs such as these! The little medieval town of Peñíscola clings desperately to the sea, encircled by walls and containing a labyrinth of weaving streets, tiny alleys and jumbled plazas – crowned by the squat castle in the centre. Sometimes called the Gibraltar of Valencia – or locally as “The City in the Sea” – Peñíscola is a fortified city built onto on an easily-defensible headland that juts into the sea. The 13th castle was erected by none other than the infamous Knights Templar (our friends who also built Segovia‘s Church Vera Cruz) – and it is from here that one enjoys the epic panorama of city and sea.

Pro tip: Aside from wandering the lovely streets, be sure to visit the castle, lighthouse, bateria, and House of Shells. There are several nice terrases for sangria or “tapas and caña” (tapas, or small plates of food, that accompany a glass of beer).

Other Beautiful Places in Spain:

Orange umbrellas by orange roofs in Barcelona’s famous central plaza, stylised in the short-lived but spectacular Art Nouveau design. Orange is surely the national colour of Spain! Spain, after all, is a vibrant, lively country despite any economic mishaps. Everything is fun in Spain – from eating to drinking to taking naps to commuting (try out one of those mopeds!). Everybody is always outside, in the streets, on the balconies, in the plazas. Thanks to the largely sunny climate, life is nearly always spent outside – except during mealtime of course (14h-16h), which is traditionally taken inside with all the family, particularly if you live in a village or small town. And despite economic troubles, you’ll see nothing but smiles! 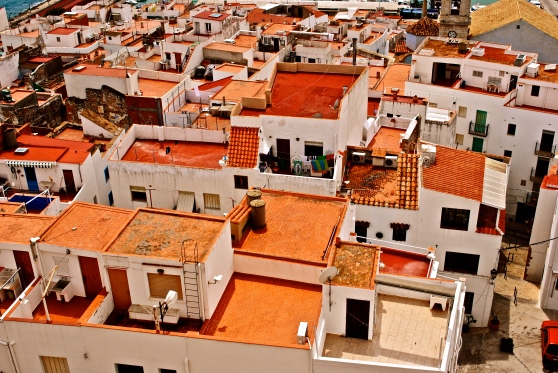 What comes to mind when you’re caught getting this birds-eye view of Spanish roofs? Lots of things: olives, fiestas, sangria, the tango, beaches, paella, terracotta, tapas, ancient architecture, the Spanish language, glasses of wine. Spain is a place that should be part of every person’s life. Take a leaf out of their cheerful, orange-y playbook and enjoy life. The Spanish comprehend the meaning of life better than most of us – perhaps not the reason we’re here, or anything that profound – but they do understand something very important that most of us routinely forget: we’ve only got one life on this earth, so why squander it doing things we don’t like? The Spanish may not understand the meaning of national debt or a strong economy, but they sure know how to eat, drink, sing, dance, travel, talk, cook and shop—at any given moment of our 24-hour day. Work comes second; life comes first. Maybe it’s not the richest country, but they sure are one of the happiest. Even though we’re not all cut out for life as a émigré Spanish person—we sure as hell are cut out for enjoying life like the Spanish.

Other Colourful Places in Europe