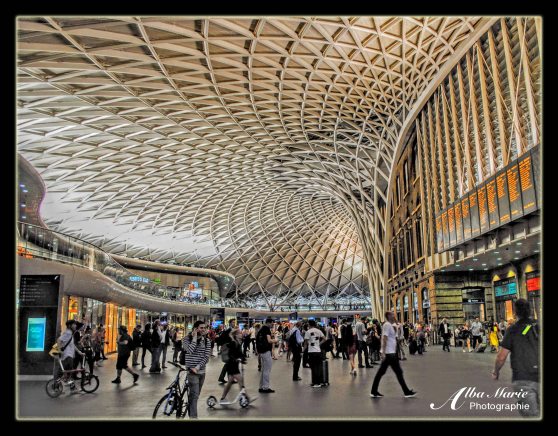 The Tube. At once iconic, eye-catching and mind-boggling, stations of the London Tube have both featured in and inspired numerous films, series and books, from JK Rowling’s Harry Potter to BBC’s Sherlock to Neil Gaiman’s Neverwhere. English railways and trains, too, have long held an allure of bygone times of the golden age of railways. Though there are many stations at the heart of London’s public transit, King’s Cross is high on the list. It’s funny how something so ordinary and boring – public transportation – has now become such a powerful symbol of one of the greatest cities in Europe, but there you have it. Opened in Victorian London (1852 to be precise), Kings Cross grew quickly as London’s newfound suburbs expanded at an unprecedented rate, becoming a symbol of the neighbourhood’s prosperity at the time. By the the end of the 20th century, however, King’s Cross station had fallen into decline, and the surrounding streets known for their seedy and unsavoury character. Then in 1997 an unknown author published her debut fantasy novel about a boy wizard called Harry Potter living in a parallel magical England – accessible through Platform 9¾ from… you guessed it…King’s Cross Station. By the early 2000s, the station and area surrounding it saw a serious refurbishment – as well as a bit of marketing: a fake Platform 9¾ was constructed, complete with a half-disappeared trolley! Too bad it doesn’t actually lead to Hogwarts…

Pro tip: Platform 9¾ is popular with tourists so try to avoid peak times if you want a photo! Also, the British National Library is just around the corner if you’re feeling bookish. It’s no Hogwarts, but still beautiful!

Other Intriguing Railway and Underground Stations

Tunnel between Flam and Myrdal, Norway

The Flåmsbana rail system—built to allow easier access to the Sognefjord—traverses the beautiful Flåm Valley, giving voyagers breath-taking views of Norway’s amazing scenery. The Flåmsbana railway is one of the steepest railways in the world—something like 80% of the 20-kilometer-long railway is over 50% gradient. That means it gains one meter per every 18! One of the most remarkable aspects of the rail (views aside!) are the twenty tunnels. All but two were constructed without the use of machinery, meaning about one meter per month—so it’s amazing that they ever finished. Not only that, but the Flåmsbana has enjoyed amazing success, and is still one of Norway’s biggest attractions. As for the theme of ‘reflections,’ this photo was shot from the window as the train headed into a tunnel. The reflection of the women sitting opposite was reflected by the glass, appearing as if she were part of the mountain in true Pocahontas-style. The symbolism seemed appropriate!