Would you believe this “temple” actually dates to only the 18th century and is located in Northern Ireland? Strangely enough, that’s the truth. One would call it a folly (i.e. a fake building built to look like something much older). Mussenden Temple was built by Lord Bristol in 1785. The estate was originally that of Frederick, the 4th Earl of Bristol (yes, Bristol, England…he’s far from home! Sadly this happened often – English “heroes” were given stolen Irish land), who was the Church of Ireland (e.g. Protestant) Bishop of Derry for 35 years in the late 1700s. Lord Bristol modelled his temple on the Roman Temple of Vesta in the Roman Forum, though despite appearances, Mussenden Temple’s original purpose was a library. Located on the estate of Downhill Demense (now a sprawling ruin), the temple is precariously perched atop a cliff overlooking the lovely Downhill Strand. Though the temple itself did not appear in the infamous TV show Game of Thrones, the site was used as a backdrop for some scenes – in particular, Downhill Strand’s beach was one such site used. Nothing is left of the house but a shell, and though the temple fares slightly better, it is no longer a library. Coastal erosion is bringing the temple ever closer to the edge and though solutions are being looked at to keep the temple from tumbling down to the sea, you may want to visit sooner rather than later…

Pro tip: You can actually get married at this temple…imagine that! Also note that dog lovers can bring their pups with them when visiting Downhill Demense and Mussendun Temple. There are also lovely gardens on far side of the estate. Nearby, don’t miss the world-famous Giant’s Causeway or Bushmill’s Distillery, Ireland’s oldest.

Other Game of Thrones Filming Sites

Wait… Egypt in Spain? Why yes indeed. Madrid’s Parque del Oeste houses the ancient Egyptian Temple of Debod. Originally constructed in Aswan, Egypt in 200 BC and dedicated to Isis, the UNESCO temple had to be moved in 1970 as result of the Aswan High Dam project which created the artificial Lake Nassar in the temple’s original emplacement. The decision was made to donate the Temple of Debod to Spain in graditude for Spain’s aid in saving dozens of the ancient sites and monuments from the reservoir created by the dam. Though the only Egyptian temple in Spain (strangely enough!), Debod Temple has sister temples that you may have seen, each donated for the same reason as Debod. Notably this includes the Temple of Dendur located in NYC’s Metropolitan Museum of Art, as well as the Temple of Ellesyia in Torino (Italy) and the Temple of Taffeh in Leiden (Netherlands). Parque del Oeste, not too far from Madrid’s Royal Palace, is a lovely spot for a walk by day – but it is the soft glow of the setting sun and the romantic glow of moonlight that shows the Temple of Debod in its best light. Under a brilliant crescent moon, gaze upon the ancient temple reflected into the pool encircling the monument.

Pro info: Parque del Oeste is located a short walking distance from the city centre; closest metro stop is Principe Pio. Entry free. Best visited at night when the tombs are lit up!

Other Great Urban Parks of Europe 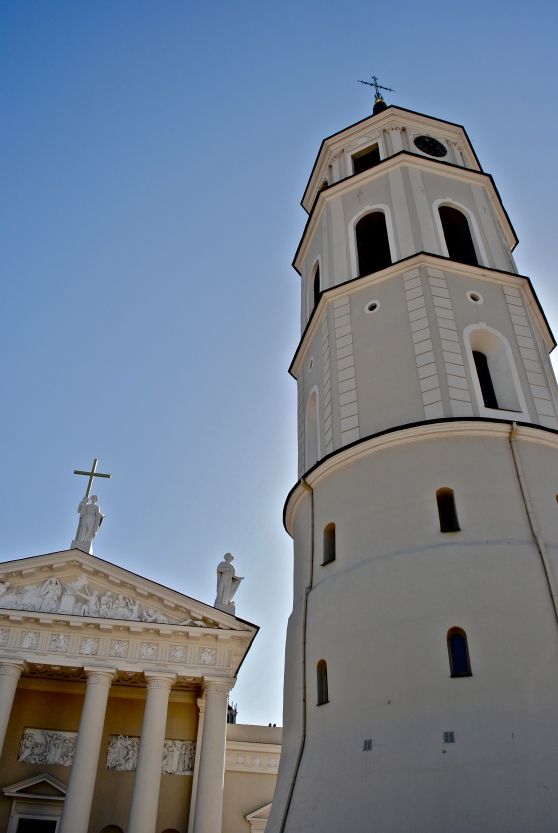 Neoclassicism.  What an invention. Back in the mid-18th century, a resurgence of Greek and Roman architecture became a la mode. The opposite of the naturalistic Rococo style, Neoclassicism strove to return to the “purity” of Greek and Roman styles, mirroring their symmetry, geometric design and perspective. The famous Italian architect Andrea Palladio played an instrumental role with the construction of his famous albeit peculiar Villa Capra “La Rotonda,” which he based on Roman temples and other similar designs. One of the most striking creations to come out of this architectural period is the Vilnius Cathedral, circa 1783, located in central Vilnius. One doesn’t normally imagine a Catholic cathedral in the capital city of an Eastern European country to resemble an ancient Roman temple—but there you have it, and there it is – see for yourself. Lithuania is full of surprises!