Though perhaps less world-famous than America’s New England, Ireland in autumn is a spectacular place. The region of Galway is usually known for two places: the lively Galway City and the desolate mountains of Connemara in northwest Co Galway. Inland however, Galway holds other wonders, such as rural hills, crumbling ruins, tiny villages, and beautiful forests such as here at Loughrea. Loughrea in Co Galway is not an area well-known to tourists as it is inland and away from the ocean. Instead, it sits on the shores of a lake, with vestiges of its medieval history nearby (town walls, priories, and a gate). Founded by Richard de Burgo, an Anglo-Norman knight in 1236, the town grew based on its important location along the Shannon River. Despite its Norman origins, the family later adopted Gaelic names and traditions, and Loughrea, along with much of Connemara, was part of the Gaelic Revival in the late 1800s (which included the Irish language as well as Gaelic sports, architecture, music and other traditions), though its garrison status meant that it did not take part in the 1916 rebellion. This cabin near the small town of Loughrea is particularly idyllic, nestled into the brilliant golden leaves. In autumn these forests glow in a shimmering quilt of yellow, orange and red, making for some beautiful panoramas and lovely photos. Autumn in Ireland is a great time of year to get outdoors as there are few tourists and oftentimes a fair amount of clear days as long as you don’t mind a bit of chilly weather! At the end of the day, curl up by a turf fire in a traditional pub with a pint of Guinness while listening to trad music  and you have the perfect day.

Pro tip: Check out Irishtrails.ie for more info on hiking trails in Ireland and where to find the trailheads.

Though perhaps younger than some of the cities of the Mediterranean, Riga, the capital of Latvia, has over 800 years of history – with most of that history turbulent. Latvia’s location along the Baltic Sea has long made it an important strategical spot for centuries. In the Viking era, the fearsome Scandinavian warriors often came to the Baltics during their annual raids, though the Baltic raids weren’t considered as good as those of England or France. In medieval times, German and Teutonic knights and Swedish kings stamped in and out of Riga and Latvia – really the Baltics in general – taking control of it or simply raiding it in times of need. In more recent times, the Soviets laid claim to this little Baltic nation, in its quest for control over trade and military might in the Baltic Sea. From above, we see a forest of Gothic spires rising above Riga, and below down at street level, we see a beautiful rainbow of bright colours and Art Nouveau façades adorning each street, square and alleyway. Riga is an easy place to wander and explore – Art Nouveau architecture rears up randomly throughout the city, narrow alleys wrap themselves around unique buildings, small streets open up into large squares home to impressive churches, guildhalls, markets, mansions and other magnificent edifices. It is perhaps for this splendid blend of styles, creativity, history and beauty that Riga Old Town is a UNESCO World Heritage site.

Pro tip: The most famous instance of architecture in Riga is surely the House of the Blackheads, associated with the guilds. Click to learn more about visiting this iconic interior, including hours and admission prices.

Other Colourful Streets in Europe 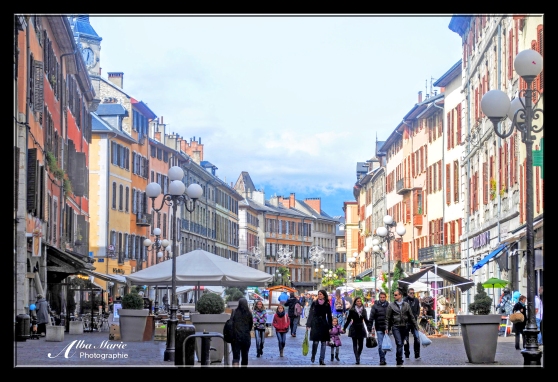 From farmer’s markets to flea markets, ice cream stands to crêperies, from sunshine to rainy days, Place Saint Léger, tucked within the bright, colourful streets of Chambéry, has seen it all. Chambéry is a small but beautiful French town not far from the Italian border and comfortably snuggled in the foothills of the French Alps. In fact, on a clear day, the Alps are clearly visible; on a rainy day, you may just make out their massive silhouettes in the fog. Chambéry’s air is much cooler and crisper than the air of larger nearby cities like Lyon or Torino. It’s surprisingly colourful here, as if Poland‘s vibrant market squares have been transported to Western Europe and imposed upon a French city. Despite its small size and vaguely-remote location, Chambéry is a bustling mini-metropolis. Street after street exudes colours from their painted facades. Neighbours stop to chat, tourists wander the streets in small groups, cafes fill with patrons. Everywhere, there is an air of tranquility. This is a place where one eats heartily, walks slowly, breathes clearly, and relaxes entirely.

Pro tip: Looking for something unique? Head to Place des Éléphants to see Chambery’s strange centrepiece: the Elephant Fountain! It is exactly what it sounds like, a fountain made of 4 elephant sculptures. For hikers and outdoor lovers, Chambéry is a good base to explore the western fringes of the Alps and still enjoy the charms of a sizeable city.

Other colourful towns in Europe:

This post originally appeared in June 2014. It has since been revised and rewritten.

Copenhagen is not a city that is afraid to be colourful. The Danes regularly rate themselves as one of the happiest populations across the globe, and though you’d have a hard time believing that from a window into Danish daily life or accidentally falling upon a Nordic Noir TV series or film (like The Bridge, The Killing or Borgen), a walk through the bright, clean and colourful streets of Copenhagen should change your mind. Copenhagen is one of Europe’s cleanest cities (an actual fact), and though the Danish capital’s inhabitants may seem somewhat dispassionate at times, their city shows their true colours – literally. Street upon street of vibrant facades traverse the capital, from the imperial King’s Garden to the hippie Christiana to the chic Nyhavn; the city ekes colour and vivacity. The secret to life in Denmark is simplicity – without making a ruckus, the Danes quietly make the most of everything in life. YOLO stands for ‘you only live once’ – but is that true? To quote a line from the novel, the Secret Diary of Hendrick Groen, 83 Years Old: “You only die once but you live everyday.” Instead of going about life with the too-vivid enthusiasm of the Spanish, the fast-paced lifestyle of the Italians or the pompous culinary pride of the French, the Danish prefer to enjoy life’s simple pleasures and daily joys with a subtle but unwavering and unquestioning contentedness – a feat that they do remarkably well. And a feat we could all learn from. 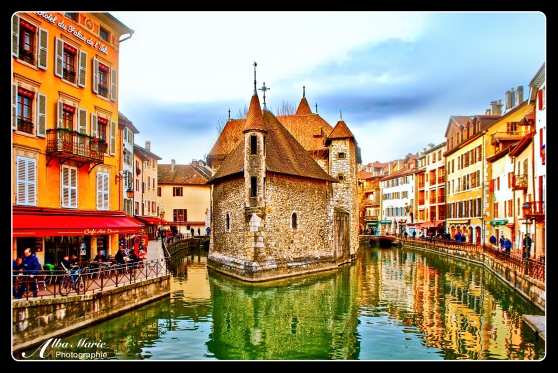 Deep in the French Alps, the ancient town of Annecy sits along the picturesque shores of Lac d’Annecy. At the heart of Annecy, at the intersection of the River Thiou and the city’s scenic, all-important canals, is the Palais de l’Ile, an impressive 12th-century building. Shaped like the prow of a ship setting sail, the Palais started out as a prison, became a coin mint, was transformed into a courthouse, housed the Presidial Council of the Province Genevois, and became military barracks. Today, it is a museum, though it is certainly more intriguing and alluring from the exterior. In a way, the Palais de l’Ile is the keystone of Annecy – the stone that holds the rest of the city’s splendour together. And what a beautiful city it is! Annecy is full of colourful facades, glittering canals, glowing lamps, bright plazas, cheerful terrace cafes, and arching bridges. It is often called the Pearl of the Alps, and any visitor to its streets, canals or lake will know that it certainly deserves its title.

More Beautiful Places in the Alps

You’ll find few urban city centres prettier than Poznan’s market square. Even during a snowstorm, Poznan’s vibrant colours are impossible to deter. A far cry from the grey, bleak country one generally attributes to Poland, Polish cities are vibrant, each building brightly painted, often embellished with patterns, designs, and images. Poznan’s public square is perhaps the best and brightest example of this. Heavily influenced by the Baroque movement, Poland’s outer borders were once regarded as the extent of Western influence in Europe, particularly regarding architecture. Polish architecture is a blatant mix of, well, most architectural styles that Europe has to offer, making places like Poznan some of the most beautiful towns to visit! These houses seem as if they stepped out of a Dr Seuss book or off a candyland board and adorn one of the prettiest market squares in all of Europe!